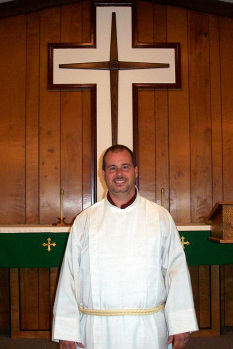 William Michael Cody was raised in Tomball, Texas, just north of Houston. After high school, he attended Concordia Lutheran College in Austin, Texas. In 1992, he met his future wife Kianna Rathgeber, and they were married March 13, 1993 at St. Paul Lutheran Church in Wichita Falls, Texas. They moved to Wichita Falls in 1995 and started a family. They have two beautiful children: Kathryn and Kyle. He is currently employed by IEH Auto Parts LLC. where he is a Commercial Accounts Manager. Pastor Cody has been serving Good Shepherd Lutheran Church since February 2012. In 2014, he was ordained and installed at Good Shepherd Lutheran Church. He looks forward to what the Lord has in store for him in the ministry.